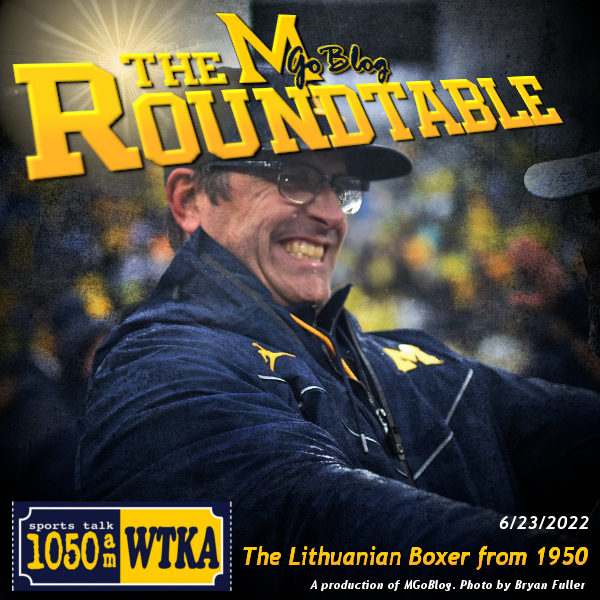 Things discussed: Re: Bakich, Sam says Seth was right, Seth says Seth was wrong, or at least needs to amend his comments on summer baseball: Semi-Pro ball is a big deal to the baseball world. Replacing a 100-year-old structure may be a good idea, but it's a very BIG idea and would take a massive risk of the kind that the Big Ten won't ever take. Baker: Just a Houstan™, but that's something we needed. Set shooter, fills a spot as a backup 2 or 3, was a top-40 recruit so if his hip heals okay he should be an alright defender of 3s. Was on a great offense so okay that he was only 10 min/game at Duke. Emoni Bates: The kind of guy Howard protects you from, because he's seen the circus and won't make the same mistake most coaches do. They just lost Frankie Collins to a down move because of a shitty parent. Not actually a good basketball player. Youssef: All in favor, good shooting stroke, has skill, can be a Franz lite. Can we win a Zoom recruitment? Dug: Best passer at Michigan since? Seth: Makes sense, since Howard probably saw he has two guys named Howard on the roster, and sorted the 247 rankings by best passer. Football recruiting: Do we panic? No. Do we worry? Yes. Sam's starting to believe Dante Moore is more likely to go to Oregon now. If you're chasing Michigan State you have a problem. Michigan's new tack sounds like a morality play and is going to blow up in their faces. Players have value to their institutions before they play: they have earned it. The players create themselves more than the coaches. Michigan has a good talent evaluation program but so does Notre Dame, and they will get in on these guys too. Hassan Haskins was a great player in high school—the system is getting better at identifying those guys. Off-air: This NIL approach is exactly like what got Michigan to fall behind in the 1950s. Oosterbaan and Crisler thought they had a solid program because they won in '47 and '48, and didn't figure out until it was way too late that they really were missing a major shift in CFB history and allowing MSU, OSU, and ND to thrive when Michigan should have dominated the early TV era. [Hit the JUMP for the player, and video and stuff]’